It doesn’t seem possible that a week has passed since our outing to Oundle Museum and super lunch at Dexters restaurant.
At a time when there is so much ‘doom & gloom’ about, it is refreshing to reflect on happier days, and I am sure that you will agree that there was plenty of fun & laughter to be had as well as plenty of historical information at the ‘Trades & Traders’ exhibition at the museum.
Ten of us altogether met at the free car park in Benefield Road last Thursday 12th March at 10.30 am, a cold windy but sunny morning, and made our way to the Museum where we were given a warm welcome by Keith Smith & friend. We were served tea, coffee & lovely home made biscuits and given a wholehearted talk about the Museum, which was apparently once The Courthouse.
Built in the mid-nineteenth century the Courthouse is a focal point of much local history, and each year exhibits a different theme. It was used as a courthouse, jail and police station for nearly 100 years. Once this ended it fell into a sad state of repair. At present, sadly the future of the museum is uncertain as it is maintained by voluntary contributions and the lease will shortly be reviewed. In 1997 Oundle Town Council successfully applied for a Lottery grant, which together with a long term loan, financed the restoration of the building. Oundle Museum is located in the Courthouse, together with both public and private offices. There are several cells both down and upstairs, the latter housing a very special guest, a very portly animated prisoner to whom we dared pay a visit! He told us that his crime was “collecting other people’s property”.
We were told that the trial of the ‘unsolved murder’ of a married couple from nearby Ashton took place in the courthouse in the 1950’s, to name but a few of many cases that must have taken place within its walls.

Eighteenth century Oundle, like many other small market towns, included a wide range of trades and occupations, such as shoemakers, fellmongers, a tanner, a turner, a Hemp Dresser, a Rope Maker, Slaters, Watchmakers, Innholders, a Fishmonger, a Miller, Grocers, a Jockey (who was probably a Horse Dealer) some Glovers and a Gunsmith.
John Clifton, master carpenter, perhaps sexton, and diarist, wrote vividly of the pleasures and hardships of the late eighteenth century, including floods, smallpox, fairs and bull running, the goings-on of his fellow townsmen, astronomy and gardening. His will shows that he had a considerable library!
A display at the museum in the Courthouse charts Oundle’s development through the centuries. In addition to the markets Oundle still contains a wide variety of shops and provides a social and shopping centre for villages up to six miles away.
Oundle will always be famous for its school!

So, after trying to take in as much as possible and with time running out, it was decided that it was time for lunch. So after bidding a fond farewell to three members of our party for various reasons off we all trundled to Dexters Italian restaurant where we enjoyed some delicious food, wine and merriment.
It was agreed how much we are enjoying our history group meetings to various places of historic interest, not forgetting what a lovely bunch of friends we have become! 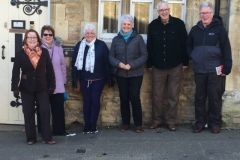 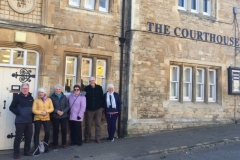