A small number of the History Group joined a Tudor guided walk in Peterborough as part of the commemorative celebrations of Katharine of  Aragon. Katharine died on 7th January 1536 in exile at Kimbolton Castle and was buried in Peterborough  Cathedral on 29th January 1536 where her body still lies to this day.  Katharine was Henry VIII’s first wife and they were married for 33 years.

We met our guide at Peterborough Museum. She was dressed in typical Tudor costume which was probably not ideal as, sadly, the weather was wet and cold!  As we left the Museum she explained that there was in fact very little Tudor architecture remaining in Peterborough but showed us Westminster House, a typical Tudor house where they had used the locally produced Collyweston Slate instead of thatch on the roof of the porch. We moved on to Narrow Bridge Street which in fact is a very wide pedestrian precinct now and home to the Town Hall. Our guide told us that where the current WH Smith stands today there used to be a pub called the Angel Inn which was owned by the Abbey and pilgrims to the city would stay there.

We moved on to Cathedral square where we were told about the Becket Chapel which housed the monastery’s holy relics, not least the relics of the newly canonized St Thomas Becket. The Cathedral is huge and quite magnificent. We learned of ‘Old Scarlett’ who was a grave digger and something of a local hero.  His main claim  to fame is that he buried  both Katharine of Aragon and Mary Queen of Scots who was beheaded at Fotheringhay Castle.  His memory lives on in a portrait above the Great West door of the Cathedral (do have a look next time you visit the cathedral) and he has a Peterborough pub ‘The Old Scarlett’ named in his honour! Quite the local folk hero!

We learned about the beautiful wooden painted ceiling of the Cathedral which is apparently the largest surviving in Europe and dates from around 1220. Damage inflicted by Oliver Cromwell and his parliamentarian troops in 1643 is very visible around the Cathedral.

Katharine’s grave is still very evident today and on the anniversary of her burial in Peterborough Cathedral, homage is paid to her life by local school children and representatives from the local Spanish community. Pomegranates are laid around the grave as a symbol of her Spanish heritage.

We finished off the afternoon  with tea and cake at Sunday’s restaurant and Tea Room situated  in The Becket Chapel on the Cathedral square. A very enjoyable way to spend a wet Sunday afternoon!

As a footnote, Mary Queen of Scots is no longer buried in The Cathedral. Her remains were taken to Westminster Abbey in 1612 at the behest of James I. 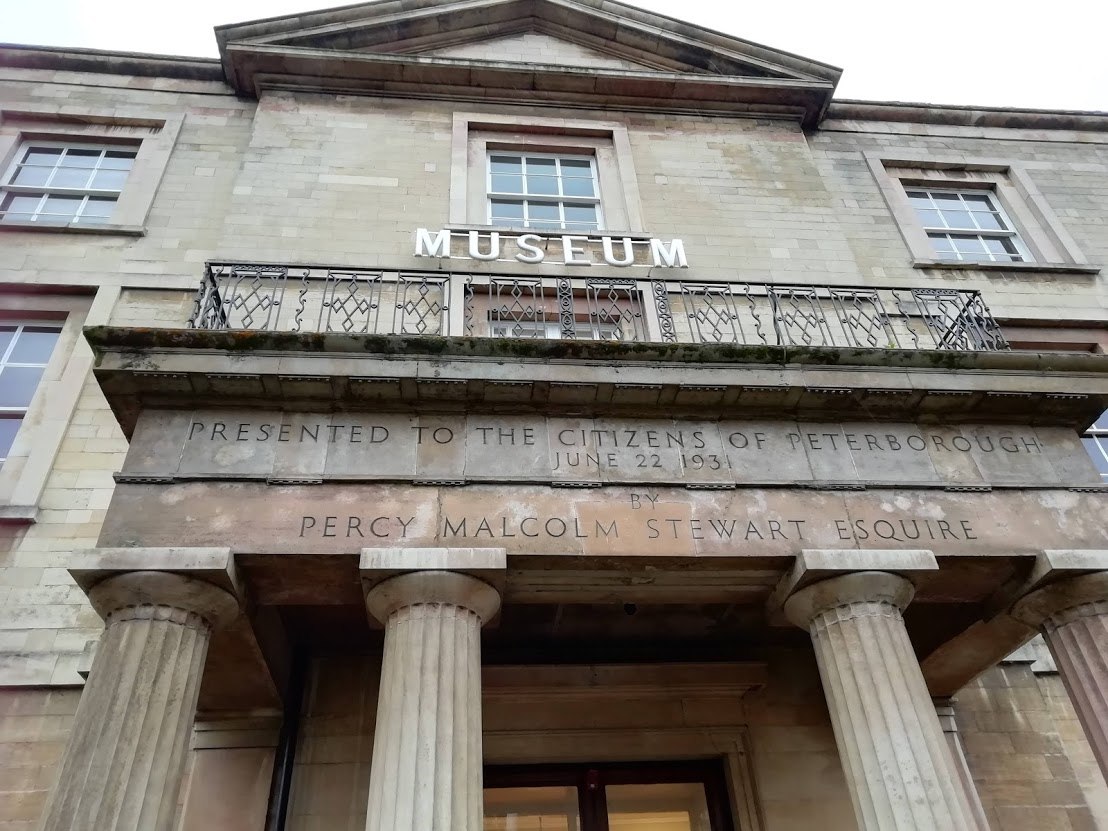 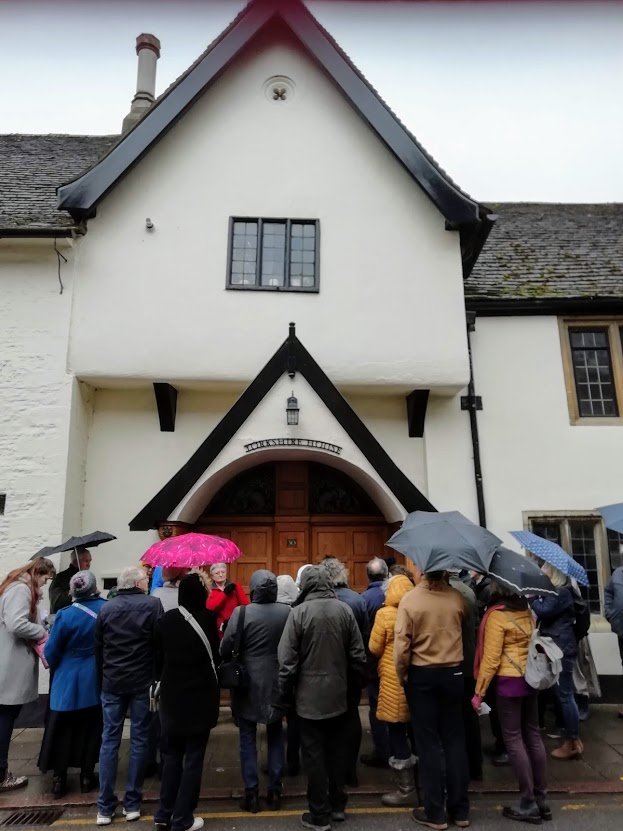 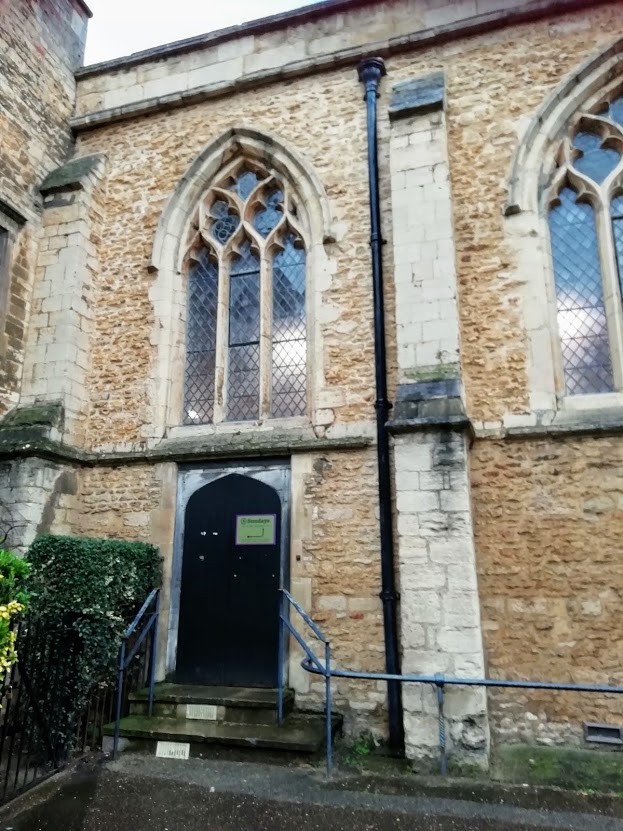 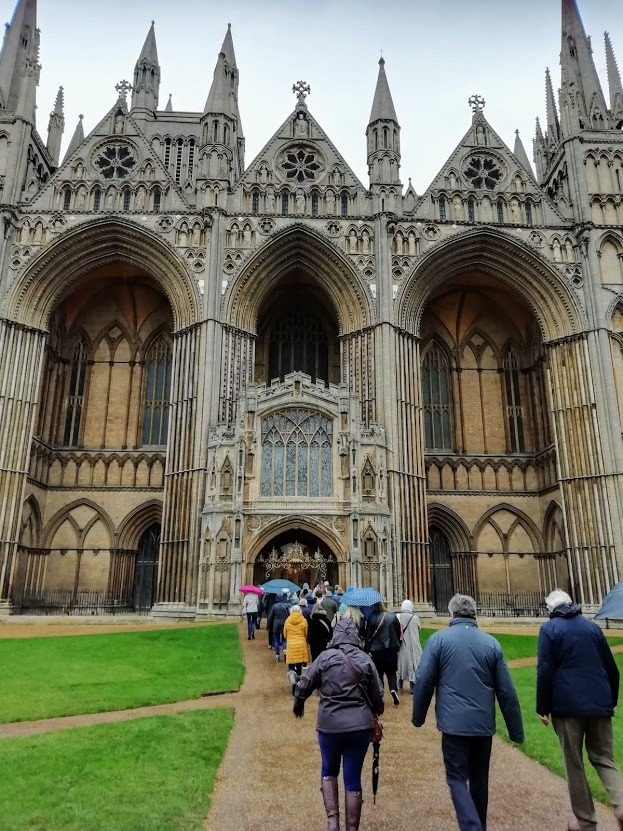 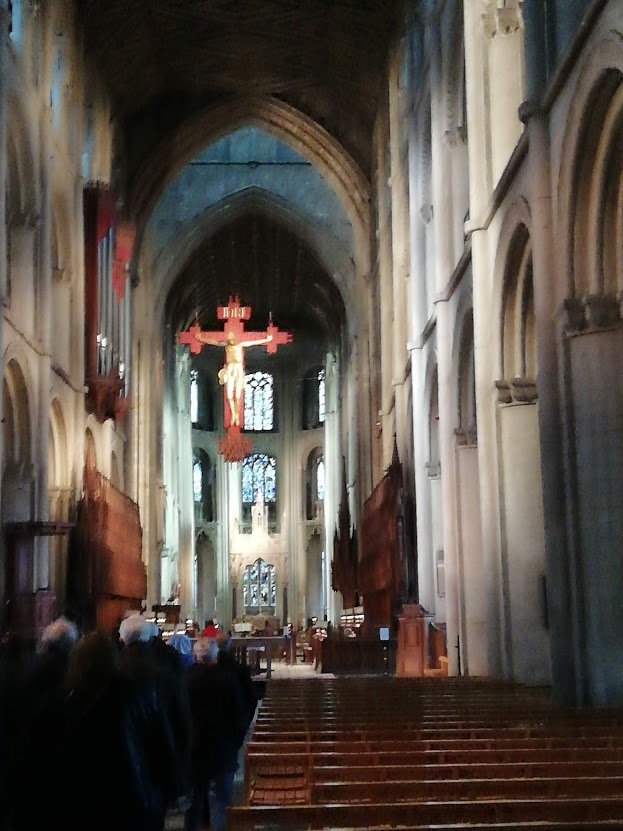 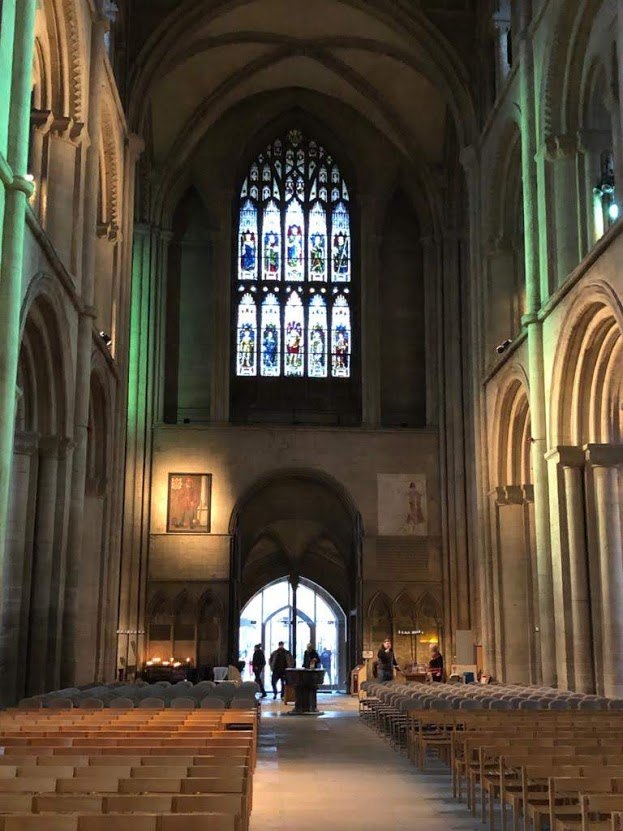 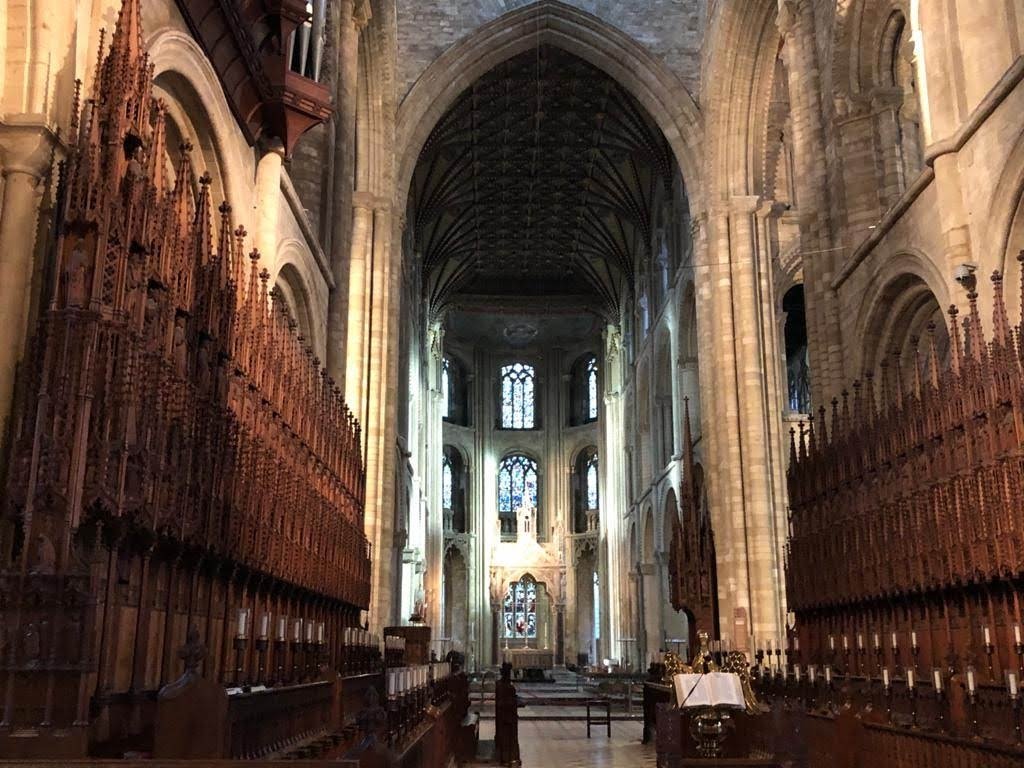 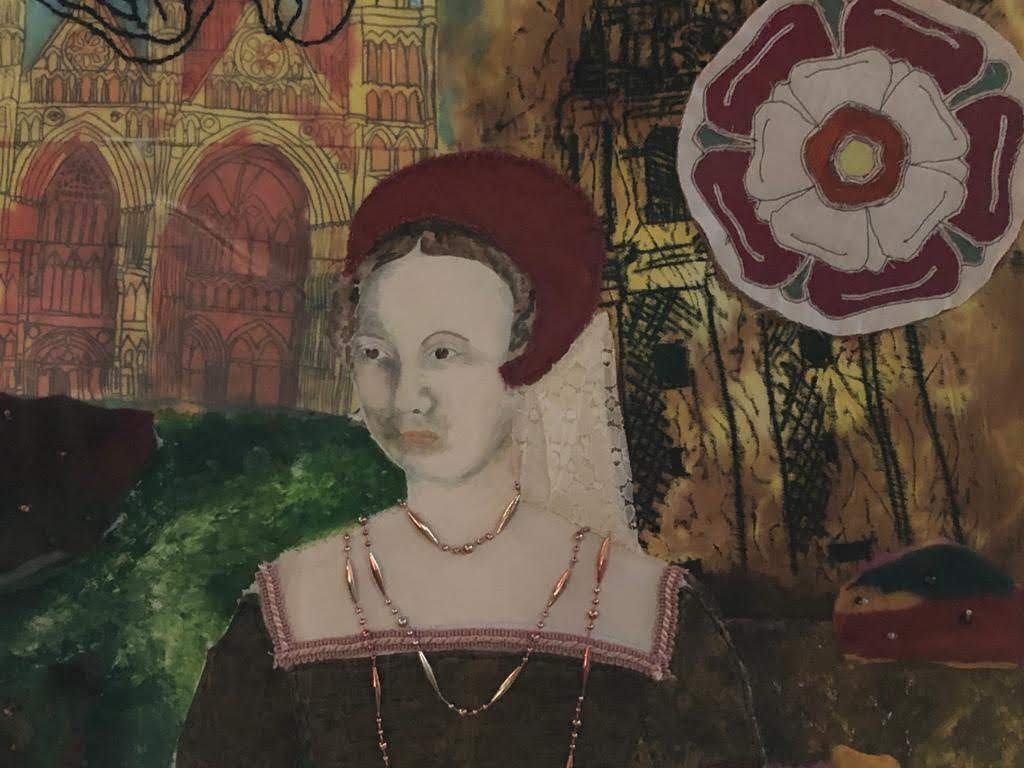 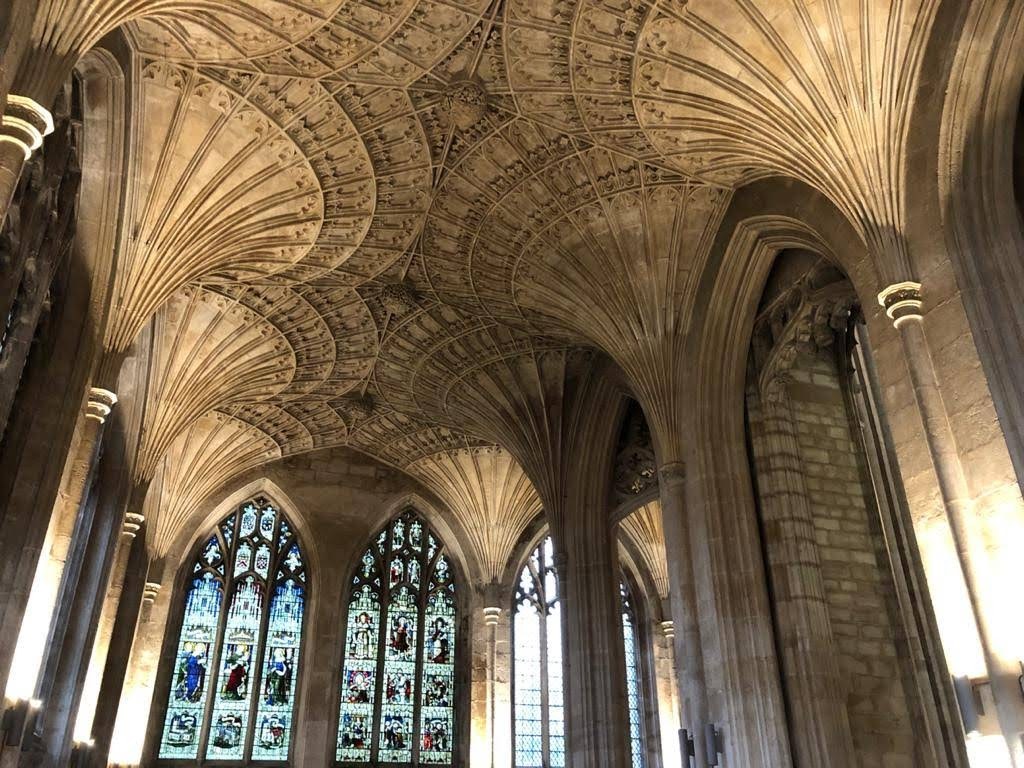